Posted by jwilson56 , 01 February 2016 · 13818 views
Now Playing is still running 24/7 with no problems. I spend my time traveling and when the weather is bad I spend my time flying in my simpit and other games. I am looking forward to Star Citizen. It looks amazing right now.

When I set out to do a simpit after I retired and saw a demo of TrackIR the first thing I came across was Helios. After some research I decided on using the PVC pipe method for building the framework. I also got a 24" touchscreen monitor. I have a man cave of sorts and decided to build it next to my main PC desk. At first I used a client/server setup for Helios running my older game machine for the touchscreen. This worked fine until the touchscreen went bad and shortly there after the PC had motherboard issues. I then took a different approach after having used that setup. One thing I did not like was not having any tactile feel for the buttons. It seemed hard to hit a touchsreen button in the heat of battle. I already had a BU0836X card joystick card to use the analog input with pots for things like trim controls so I decided I would go with a button panel instead of spending money on another monitor. I also had a 19" monitor sitting around for use as a second extended monitor off my Nvidia 980 Superclocked card. The main monitor is shared between my 28" desktop and a 39" 1080p screen. Well I decided that 32 buttons were not enough so I decided to get a GP-Wiz40 joystick card for the right side and add 32 more buttons. I built the frame for the monitor and button panels out of MFD wood that sits on my simpit table/frame. I found some nice rectangle illuminated momentary push buttons on Ebay for around a buck a piece. Also found some mushroom emergency type buttons as well as rotary ones. I mounted these to some black 1/4" plexiglass drilling the holes with a step drill. I was a Computer Applications Engineer working in a test lab for Ford Motor and built many test systems over the years so wiring the buttons was not a big deal. I use Xpadder and its Autoprofiler for a lot of the button to key conversion. I also designed a hard card stock button label system since I use this for many sims. They slip over the buttons and are easily changed.


I have been reworking my simpit to be ready for Star Citizen. I have added a custom controller for the left hand that has a built in mini analog joystick for strafing as well as a full size one for basic AWSD function for the FPS part of the game. This coupled with the Thrustmaster Warhog stick and throttle, Saitek Combat Pro Rudder Pedals as well as two custom built button panels should give me plenty of control options. Oh and then there are two Thrustmaster MFD's used for Shield and Power management. Still a work in progress as I sort out the rest of the keybindings. 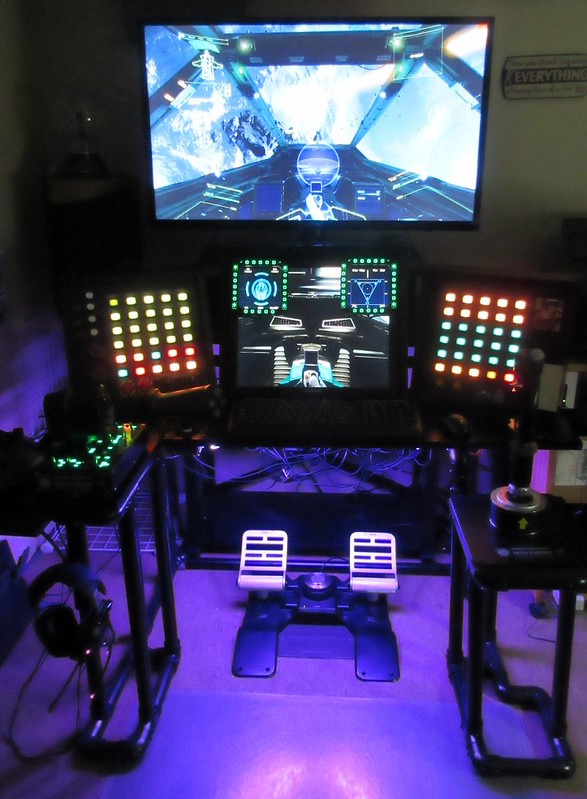 This is the new custom controller built from an old Ch products Pro Throttle handle with a custom mini joystick. The two analog axis are wired to my BU0836X 12-Bit Joystick Board and the buttons and main joystick are wired to one of my GP-Wiz40 MAX USB Compatible Input Interface cards. 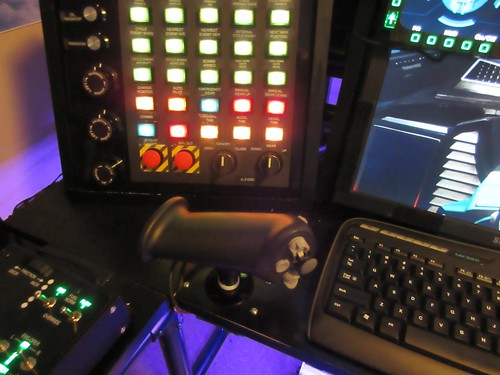 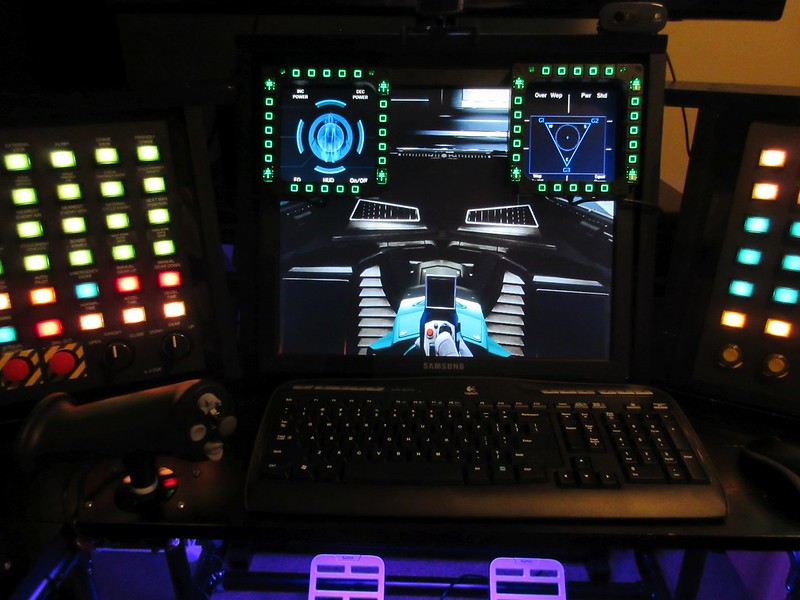 My simpit is custom built and not from a kit. It consists of the following:

This was recently added to handle the strafing for Star Citizen as well as Descent Underground which both have 6DOF movement. Also the stick slides onto a Zippyy Arcade and Fight Stick with an added teflon sleeve. This is used for the AWSD functions for the FPS part of the game (I have used one of these controllers on my desktop system for years for all the FPS'ers I play).

For many flight sims you can extract and display gauges with Helios software by creating custom profiles. Star Citizen does not currently have that ability so I just created a backdrop screen to use with the Thrusmaster MFD's as well as some popup help screens. I am looking at what else I could add down the road.

MFDE for gauges and MFD extraction

I would highly recommend using Joystick Gremlin instead of Xpadder. I is way more powerful and works great.


Backside to one of the panels 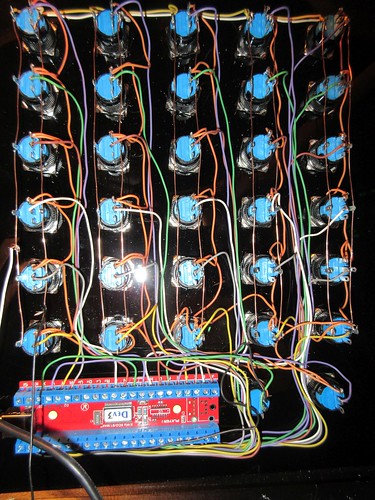 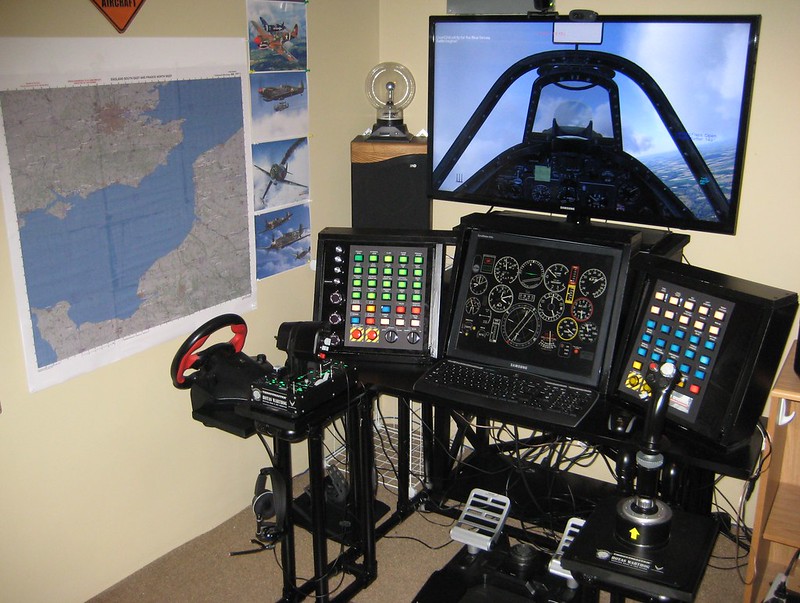 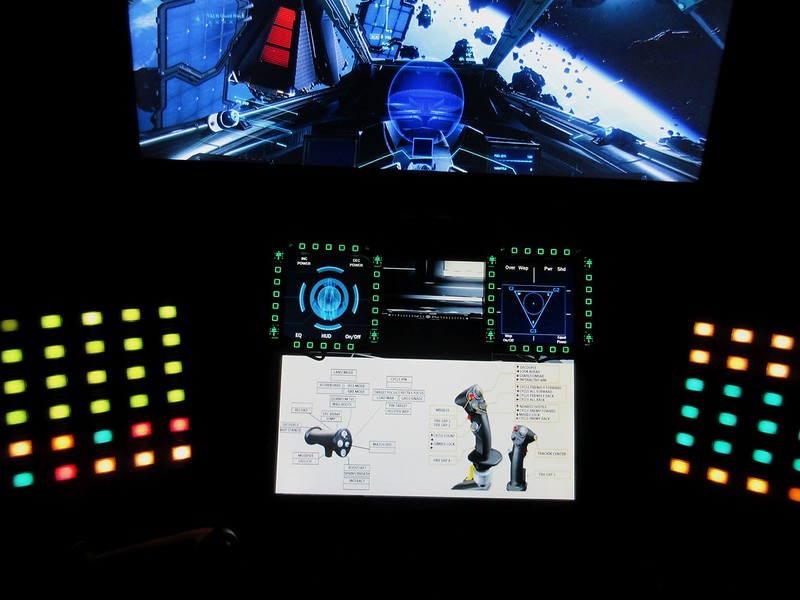 Well I finally got around to adding the tactile transducer and amp to my simpit. I have to say it is awesome and adds a lot of immersion to the game. I decided on a Dayton Audio SA100 100W Subwoofer Plate Amplifier and AuraSound AST-2B-4 Pro Bass Shaker Tactile Transducer from PartsExpress.com

The AuraSound is mounted on the bottom side of my Steelcase Computer chair I picked up at a going out of business sale from a small company local to me. It is a $700 chair as these are the ones we used at work. Never going to wear out. I got it for a steal. 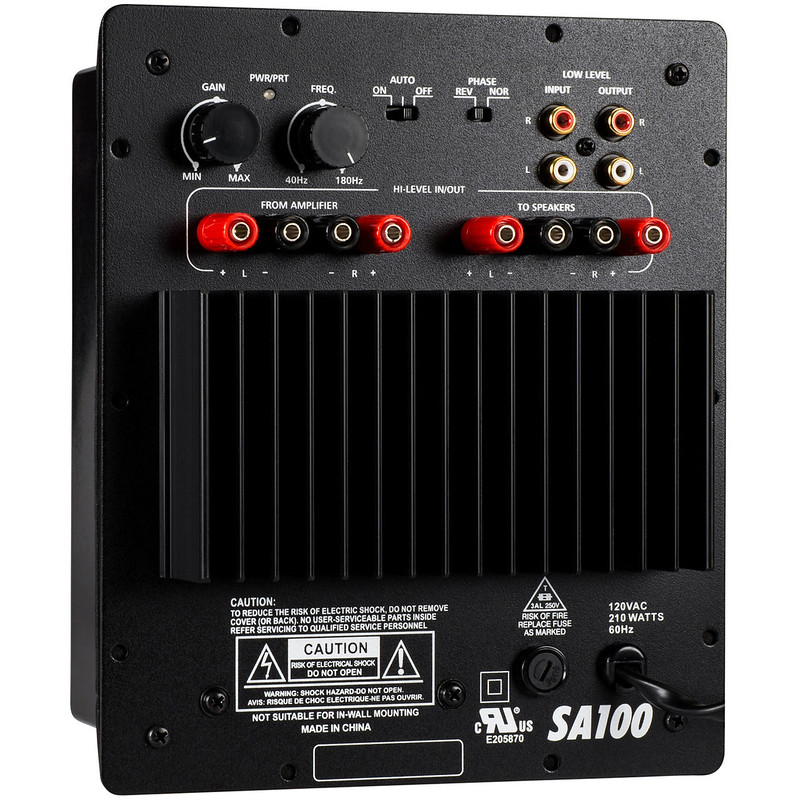 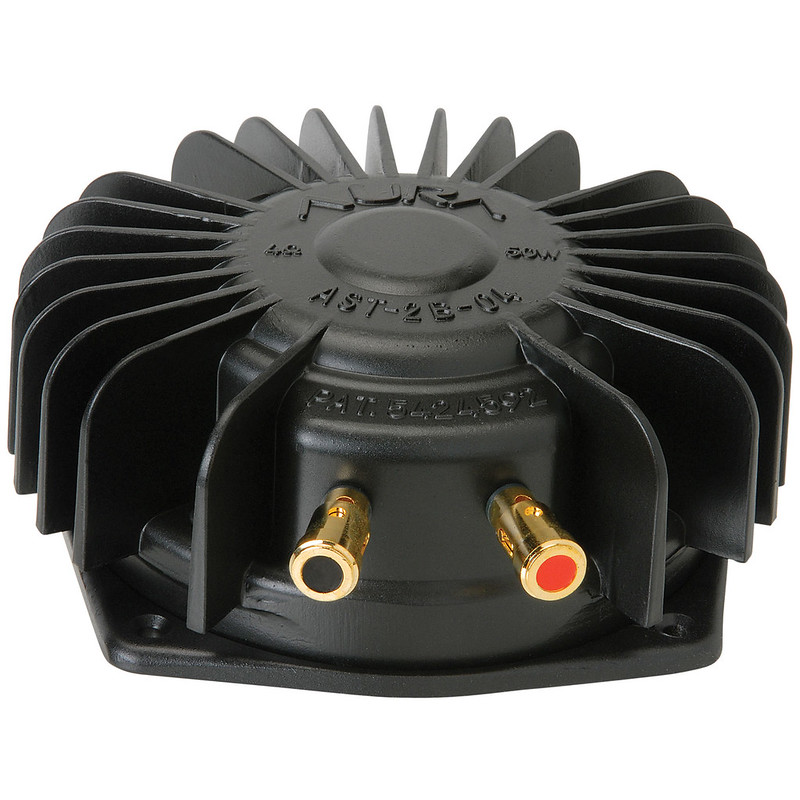 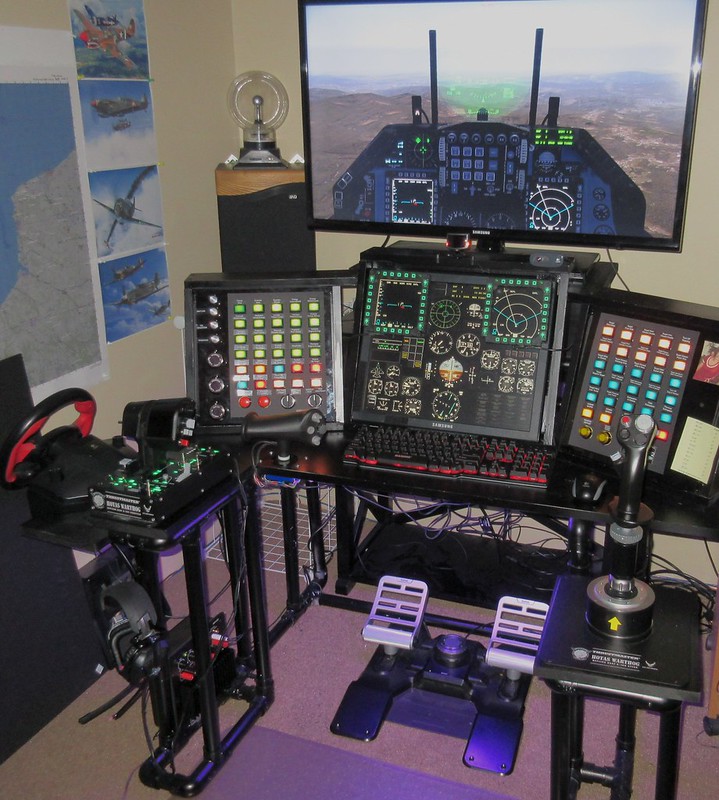 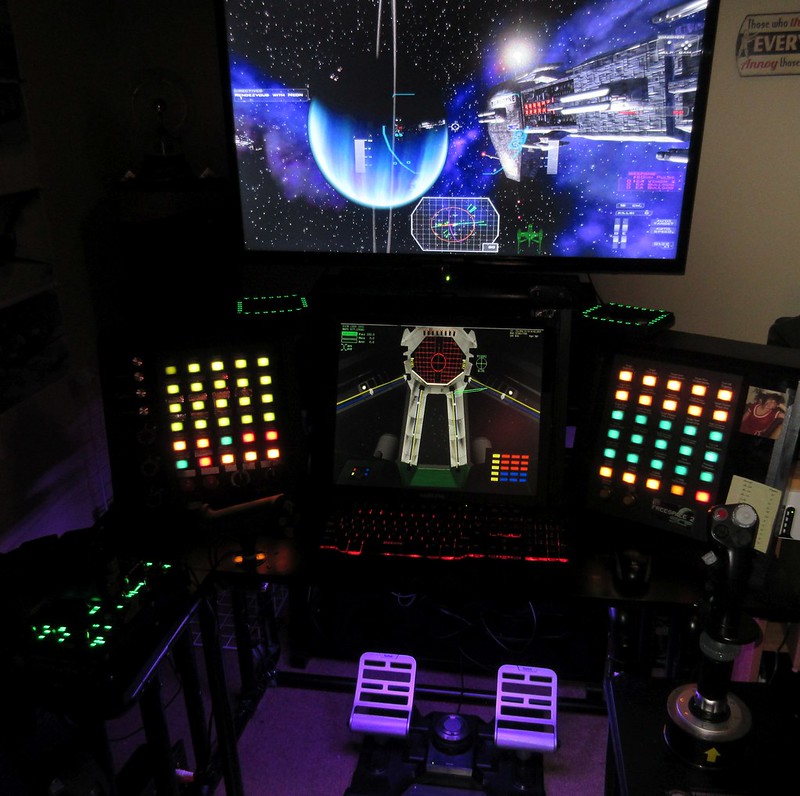 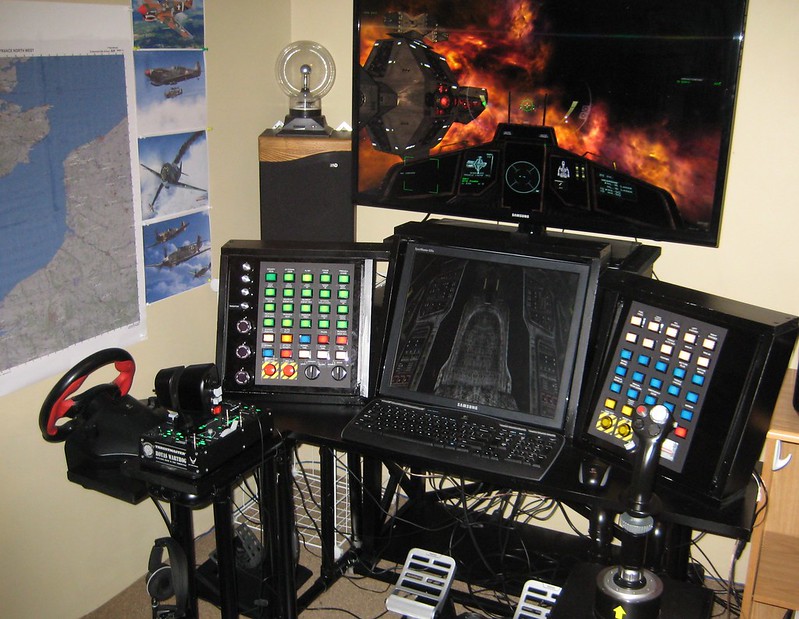 One of many of my hard card stock overlay templates 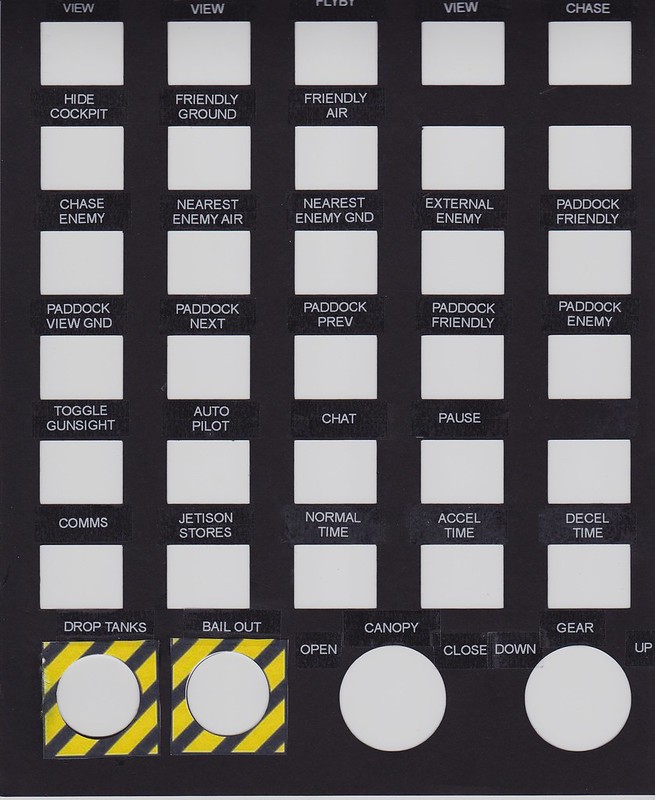 I finally got the wire I ordered and am starting on a new controller. Will post pictures when finished 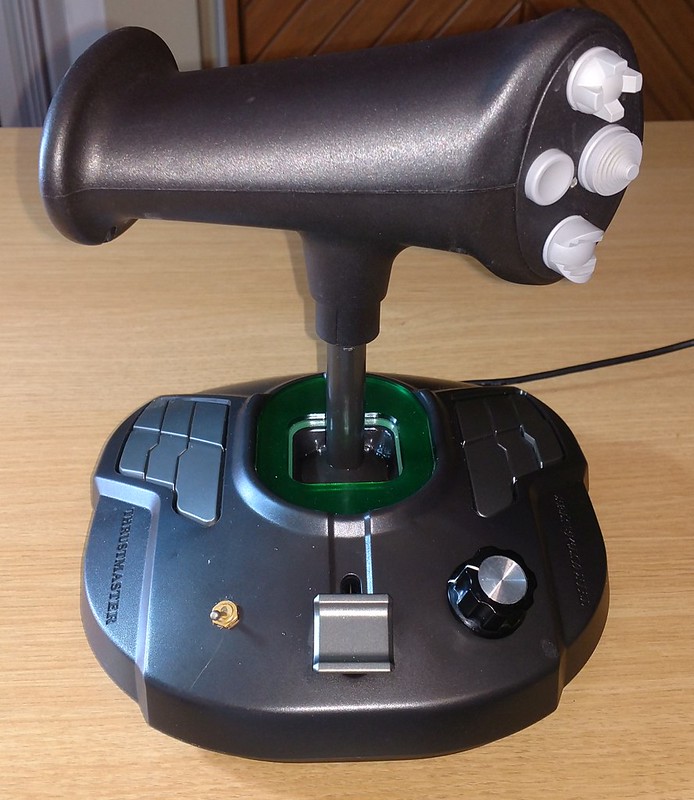 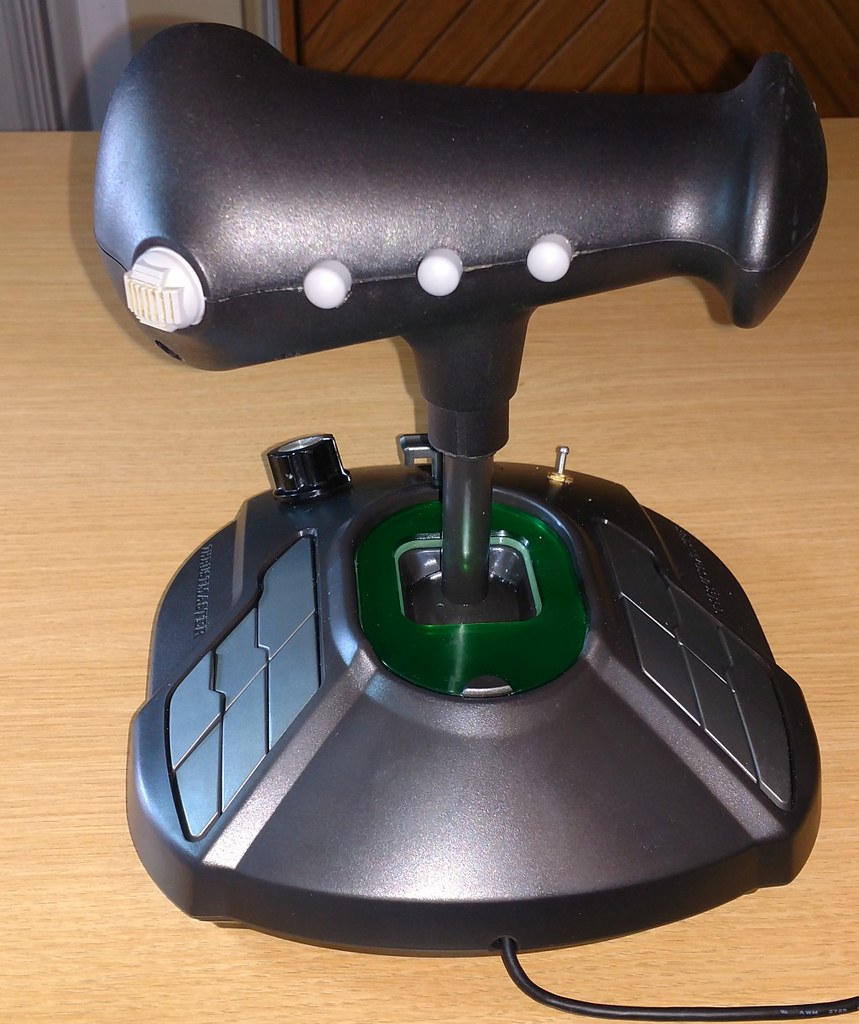 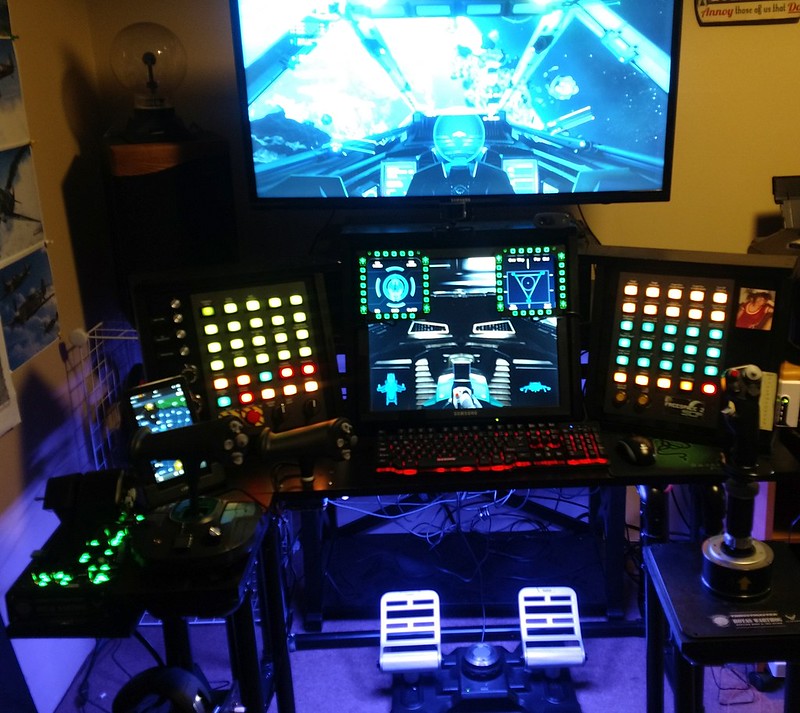 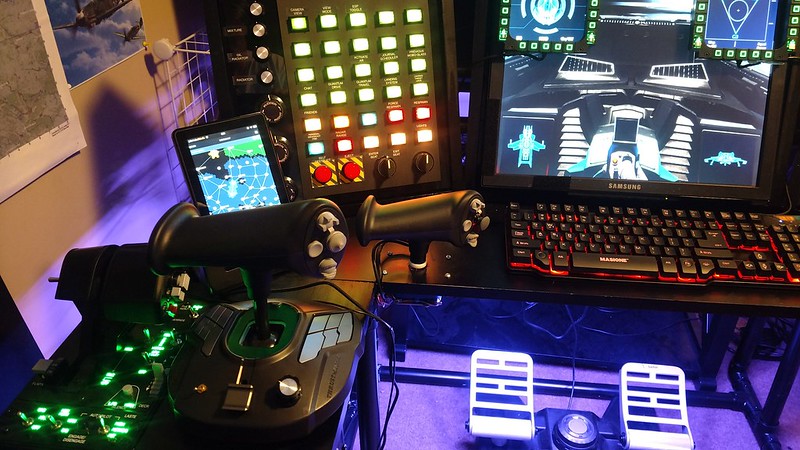