I have one area of my house thst I cannot get a lm465 lamp module to work. Is there a more sensitive x10 module? I suspect it’s a nearby plasma tv and a power strip connected to an outlet nearby sucking the signal out or putting noise on line. Before I pay for a filter could I try a more sensitive module or something like the cap pro plm-04 with an active agl circuit?

X-10 is a tricky technology, most here moved away from it long time ago. I didn't know X-10's site is still active and they are still selling their products! They even have a Wi-Fi hub/interface now!

With that said, I struggled getting a reliable signal all over the house when I used it and had to resort to installing a coupler/amplifier near the breaker box along with installing a lot of noise block plugin modules for my TV's and computers. You would be surprised at what can suck down that signal (their was a post here that stated a night light was sucking down the signal).

A simple test would be to unplug your TV and if you then get a signal, just buy a blocker module for that unit.

Welcome to the Cocoontech Forum @Proudx.

X10 mostly during Christmas time for decorations. I keep a powerline noise monitor online 24/7. I have powerline amps and filters in the fuse panel (many years now). Using the old BSR modules here and added Freewire modules a few years ago.

There are no new more sensitive X10 modules around that I know of. There is (last 10-20 years) newly designed X10 PIMs and amplifiers. Not sure if Volp is still selling his wares. 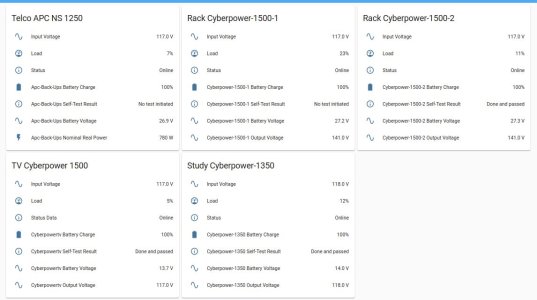 Main lighting here is powerline UPB. I do also use wireless ZWave, Zigbee and WiFi (Tasmota).

What is it you are using to control your X10 stuff? Software or hardware?

Have you considered going to newer technologies like ZWave, Zigbee or WiFi?
P

I’m using an old school honeseer2 system. I have many scripts and a ton of customizations setup and I have no desire to move on to a higher hs version. I do have the zwave with hs2 using an aetech zwave s2 stick and have a few zwave devices setup. I primary have a lot of Inexpensive x10 modules I’d like to keep around and use if possible. I got the wireless motion sensors into homeseer via a wgl designs w32800 interface. I also get infrared signals into the homeseer system using a usb uirt that catches a urc rf remote control receiver thst outputs ir into the homeseer system. This is primary used to allow control via scripts from homeseer snd of a connected rs232 matrix switch to change tv video inputs to different sources for the entire house and different zones. I also have some scripts in homeseer thst toggle lights on and off via ir input from the usbuirt as well. And I have one of those stick on wall x10 rf light switch thst controls some lights and . Events in a media room.

While I know hs2 is long unsupported I have been careful to virtualize the system and back up the vm to external usb drive. System is super stable with hs2 running as a service superlong uptimes.

I did find the source of my problem. It was my modern whirlpool microwave. I unplugged it from the wall and all is good with the X10 lm465 module. I did measure the microwave power output using a kilowatt meter and hit max of 14.75amps.

I have sarted looking for a used act ac120 15amp plugin filter to interface between microwave and outlet hoping that solves the problem. I did have a problem with interference from past with my dishwasher and x10 lights that was solved by running an in-line 20amp x10 pro hard wired filter to the hardwired dishwasher.

Yes I can add more zwave modules but I lots of cheap x10 modules and they can also be found used very cheap.
Last edited: Oct 23, 2022

There are a few of us still running Homeseer 2 @Produdx.

Personally here running two W2003 32bit HS2 Virtual boxes on Ubuntu 22.04. I am using them mostly for running two Way2Call boxes connected to two VOIP lines. Using a CID announce and blocking script integration to HSPhone from years ago. I used to run HS2 as a service too. Today not doing this. You can also run the Ocelot and connect that to a TW-523 or Jeff Volp's dual phased TW-523 emulator which I am doing today for my HAI OmniPro 2 panel. Keep the Elk ESM1 on line 24/7. Also still using the old CheaperRFID plugin for RF Tags in the automobiles. Have the W800 / RFID devices and Antennas mounted in the attic (using an old RS antenna) with serial connectivity going down two floors to the basement server rack. The 12VDC RF tags are mounted in the headliners of the automobiles. BTW found some LoRa transceivers that work for miles (1 watt and not really FCC approved). Also utilize MQTT tracking here for Android phones using OpenVPN connectivity to home.

The Homeseer X10 plugin has been much improved for HS3/HS4 with diagnostic data views. Way back purchased a "few" Digi Edgeports (8 and 16) and they work just fine directing them to different serial ports on the VBs. Each VB is around 20Gb which does make them portable. There is another VB on line with multiple MS SAPI voice fonts running with multiple instances of Homeseer Speaker app. The VR/TTS is not cloud based and works fine.

With HS3-4 have moved these days to Ubuntu with Mono running. Some pieces run in Windows virtual boxes. These pieces manage my Wintel tabletop touchscreens with MS SAPI. I could only get Windows SAPI running in PlayonLinux but it is not as good as running SAPI on Windows.

IE: one home is running mostly UPB powerline for light switches (do have ZWave-Zigbee on line). OmniPro 2 panel. 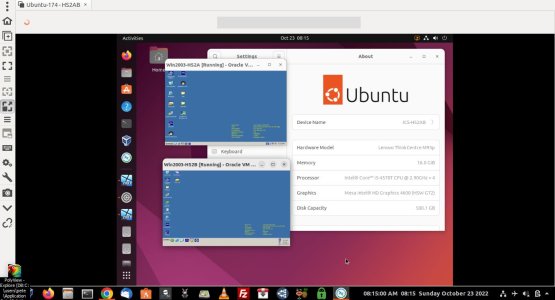 BTW you can pick up the Lenova Tiny M93 M900's for less than $100 these days. Here running one for Zoneminder and another one for Blue Iris, LMS/MythTV (Ubuntu) and a couple for W2016 RDP servers. Still running HS3-4 on mITX boards and switching these to Lenova Tiny's.

NAS box is running BSD using SAS drives these days. PFSense is also running in BSD and now upgrading the PFSense box to having 10 Gb interfaces. Very stable stuff. Much like Linux these days. I prefer to run Ubuntu on my desktops and laptops these days and dual boot them to Windows 11 (to become familiar with it). To me Windows 11 is just a colorful advertisement to the Internet especially if you surf the web with Edge. Chrome is a bit better. Firefox is still the best for me. I have my Android phones doing OpenVPN to home and using the PFSense firewall to surf the web.

Still utilize W800's X10 wireless PIRs mostly to test hard wired PIRs these days. Recently been tinkering with long range 433Mhz PIRs connected to a Tasmota wireless hub. The batteries on the MR16's last for years. Getting more than a year on the newer 433Mhz outdoor PIrs. Best though for me are Optex wired outdoor PIRs.

Pete that’s an impressive setup! I I found a used act af120 and it solved my issue.
You must log in or register to reply here.

B
Transitioning from X10, advice?
2