The Denon AVR S760H was promoted last year by Costco and this year Costco was selling it's remaining inventor for as low as $250.

I did not find one on Costco for $250. No local Costco's had any in stock.

Decided this year 2022 to replace my old Pioneer Elite AVR with this one.

Will write about my experience here with the new Denon AVR.
Last edited: Dec 29, 2022

Staff member
That's a really nice unit for sure, not surprised there's no inventory @ $250.
L

You will like the Ethernet control for your HA. The Dolby Atmos is nice also and the way it should have been done in the first place, like a good OS, divorcing the hardware speaker layout from the sound source spec. You pick a speaker layout and the amp figures out the best level mixing to accomodate. The speaker distance phasing testing drives my wife nuts.
S

This is very timely as I just purchased a receiver yesterday from Costco. I ended up getting the Onkyo TX-NR6050 however. Everything I read says those two units are both very good and pretty similar (and you can still get the Denon AVR S760H online at Costco.com - it's just at the regular $499 price). There was one feature that ultimately made me choose the Onkyo over the Denon however. That is the 2nd HMDI output. The Onkyo acts as a true 6x2 matrix switcher and this is perfect for my situation. The fact that the Onkyo is also on sale right now for $399 also helped. It is suppose to be delivered next week.

I am replacing an older Integra unit that had it's HMDI board go bad. I hear the newer units don't have this same issue, and the NR6050 actually adds a fan over the HDMI board, so I am comfortable with my selection as far as that is concerned.

My current set up is 5.1, but I actually have a pair of ceiling speakers that I have never used and could easily add them in order to take advantage of the 5.1.2 capabilities of the newer receivers. The biggest hurdle will be the "wife acceptance" factor, but I don't think it will be too hard to get approved.

My room is "L" shaped and has two TVs in it. Normally the 2nd TV (32") is pointed towards an "office" area that cannot see the main TV, but it is also on a swing wall mount and can be moved over next to the main TV (65"). This is great for watching two sporting events at the same time. Because of this, normally we want both TVs to display the same show, but there are also times when we want different shows on it. The older Integra unit had a second HMDI output, although it only mirrored the main output. This worked fine, but the fact that the new Onkyo actually has two independant HDMI outputs will work even better. 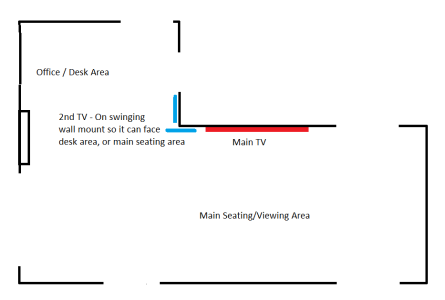 The biggest hurdle will be the "wife acceptance" factor

Here it is the same.

Current set up is with a Pioneer Elite VSX-XX configured with 7.2 speakers. Wiring the rear and middle rear speakers was very time consuming.

Wife doesn't care about sound or video quality. It is just content for her.

This past year have upgraded the speakers from JBL to Klipsch.

The room is rectangular and the TV is configured on one end of the room. Not optimal for sound or video viewing. Height is pitched from 16 feet to 20 + feet with windows almost floor to ceiling on one side and two skylights on the ceiling.
L

Hard to bounce sound off those high and sloped ceilings.

My rear speakers were always hung from the ceiling so the "height" sounds were never much different in effects. In my apartment now, I have 10' ceilings in a small living room, and the problem with a soundbar is getting those height sounds to the ceiling and back. Likely a waste of sound energy. LOL.

hmmmmm... maybe gaming chairs with speakers built into the headrests would be more comfortable? OK...wife will be slapping me soon...LOL
L

Just remembered! I assume that AVR came with a sound setup microphone?

I tuned the Pioneer sound with a microphone to my position here. Wife has a hearing loss in one ear so she cranks the volume up while watching TV.

The parrot starts in on her yelling (jungle calls and obscenities) louder than the TV...then she yells at the parrot to shut up and then she turns down the volume.

Kika (Amazon Blue Crown) is old and cranky these days. (~45 yo) and she is jealous of wife. (she hates wife and wife hates her) 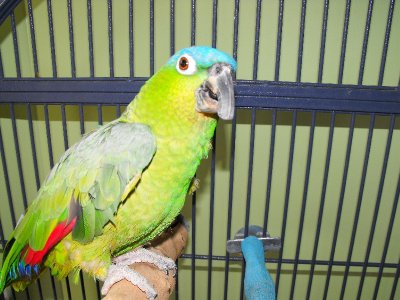 Installed the new Denon AVR-S760H today. It was easy and works fine.

The web interface and built in GUI is much more responsive than the Pioneer Web and GUI interface.

Removed and labeled each pair of speaker wires before connecting new AVR. Many years ago did redo the build on the media cabinet installing heavy duty casters on the base for easy moving on a rug. You do not see the casters which is nice.

Here is what the HTML gui looks like. Updated the firmware this morning.

Did not know here that my sound was not passed through properly via the TV ARC / CEC connection. Only DD works via this connection.

IE: HDMI sources plugged in to the TV and used the ARC HDMI connection back to the AVR. This does not pass DTS-Dolby Atmos - et al.

Test would be just to put the sound sample on a USB stick and play it back on your TV.

Downloaded a bunch of test files here (as I only utilize KODI STBs here).

Upgraded all of my HDMI connections with new cables:

Described as (on Amazon).

One HDMI cable from AVR to TV. Rest of the sources plug in to the AVR with short cables (very thick). Noticed that the CEC is working well and sound is working nicely now with the speakers (and Atmos adds). The AVR runs much cooler than the Pioneer Elite AVR.
S

Here is a good read on the subject. https://thehometheaterdiy.com/can-hdmi-arc-send-dolby-atmos-audio/

Wow what a difference in sound when I went to plugging the HDMI sources directly to the AVR.

I tried all of the Kodi test audio files posted above to test and now they all work!!
Last edited: Jan 10, 2023
L

My older Samsung TV would show audio and video formats when the right remote function "Info" was clicked. Those TVs would not reproduce Dolby, let alone Atmos so passing through them was just mostly stereo sound and a waste of amplifier decoding.

Now with my newer Sony Bravia XR TVs I cannot find that information anywhere, to be able to diagnose if I am getting full sound and what the protocol is coming through at. When you pay for Dolby Atmos you want to be sure you are getting the full capability. My 10' ceilings are not helping diagnose with any bounce technique they use.

Yes here the Denon AVR will display the format when starting a movie. The KODI box will display the video and audio format here if I hit zero zero (defined). The best help is the Dolby / DTS test files.

Before with the Pioneer AVR mostly cared about 4K playback with the TV and never much paid attention to anything other than Dolby 5.1 which worked fine via the ARC connection. The Pioneer does play back everything except for Dolby Atmos.

Last night watched the first episode of Kaleidoscope with the Dolby Atmos soundtrack. Sounded great to me.
L

pete_c said:
Yes here the Denon AVR will display the format when starting a movie. The KODI box will display the video and audio format here if I hit zero zero (defined). The best help is the Dolby / DTS test files.

Before with the Pioneer AVR mostly cared about 4K playback with the TV and never much paid attention to anything other than Dolby 5.1 which worked fine via the ARC connection. The Pioneer does play back everything except for Dolby Atmos.

Last night watched the first episode of Kaleidoscope with the Dolby Atmos soundtrack. Sounded great to me.
Click to expand...

Even with Dolby 5.1, years back, many times we thought about disconnecting the rear speakers as so many TV shows and movies had sounds coming from the back that were so real we thought somebody was in the house, at the door, or something fell and broke. The only way to tell was to back the movie up and replay it. If it happened again it was on the sound track.
You must log in or register to reply here.