Future of Z-Wave and Zigbee

When I saw your signature assumed you are using Magic Home RGB strip controllers. These are around $5 USD on Ebay these days.

Here used Magic Home RGB WiFi controllers for my LED kitchen counter lighting. I used only one channel and modded the firmware making them cloudless.

It is running Espurna and connected a temperature sensor and digital on off and dimming pot to it. Out of the box they use WiFi and an IR remote control.

I started out running more than 20 x 5m RGBW strips to facilitate lighting in two pinwheel formats for a wedding in a tent. I got carried away and wrote many animations to make dancing and special events a little more fancy. Then I discovered that there were many brands of RGBW and now RGBCW bulbs that use the same protocol. After moving from my larger home to a sky apartment I now only run about 5 RGBW strips and more RGBCW bulbs. My latest venture was two gooseneck MagicHome Pro app compatible variable white temperature lamps. I had to sniff out the protocol as they were protocol compatible, except for the two white levels. It turned out to be completely different packet structure but I just patched it into the bridging software when it finds one in the interrogation of type..

Here never went much beyond modification of the MagicHome controller hardware and software. It all works fine for me and is high on the WAF.

To make this work it was mostly related to modification of the ESP firmware using the right "speak" and save to the device. 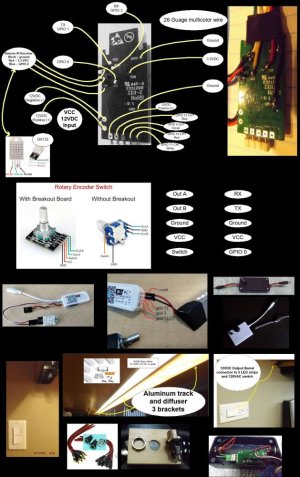 The automation technology is moving so fast these days that it is hard to keep up. Keep it much simpler these days while I tinker to keep busy I always leave in place what continues to work for me.
L

pete_c said:
Here never went much beyond modification of the MagicHome controller hardware and software. It all works fine for me and is high on the WAF.

To make this work it was mostly related to modification of the ESP firmware using the right "speak" and save to the device.

The automation technology is moving so fast these days that it is hard to keep up. Keep it much simpler these days while I tinker to keep busy I always leave in place what continues to work for me.
Click to expand...

Yeah, you certainly have to pick your poison or you get nowhere. I find it hard reading forums and walking away from threads thinking "that isn't for me".
G

What happens with these systems if the internet or wifi goes down?
M

GeorgieC said:
What happens with these systems if the internet or wifi goes down?
Click to expand...

The same thing that happens when a Z-Wave controller goes down.

Every system has its critical controller that is vulnerable to loss of connection/signal/power/crash. I've tried many systems over the years, and every one has had it's occasional problems that cause it to be flakey or just stop working. But there are always ways to improve robustness and limit failures - just part of the burden in DIY systems.

That said, my Unifi wifi has been very solid using overlapping radios, and is powered via UPS - so I am becoming more comfortable with wifi lighting - slowly adding more Shelly devices. My X-10 stuff is getting old and starting to suffer from powerline interference. I am seeing Z-wave devices randomly stop working a few times per year, and the Homeseer implementation is flakey in my experience. I have yet to see any Shelly wifi device not work. No internet required.
L

GeorgieC said:
What happens with these systems if the internet or wifi goes down?
Click to expand...

Same thing with any other home automation protocol. If your devices are Internet dependent, then they cannot be controlled. Mine are not.

If your devices are WiFi dependent then they cannot be controlled, same as when any other home automation system modem goes down or becomes deprecated. WiFi is a very strong and well supported protocol and I could get a new modem (or another from my junkbox) within an hour. I could also use a local switch to operate my home automation system that controls my WiFi lights, and if that wasn't enough, my bulbs can also be operated from BT directly from the mobile phone app. None of this involves any Internet or Internet connections.
S

I didn't "buy into" any lighting system for a long time due to this splintering of protocols. I could never bring myself to spend serious money on a bunch of switches/plugs that used a protocol that I knew wouldn't stand up to the test of time (because no automation protocol so far has).

I like Tasmota because it does remove the cloud dependency that so many consumer "smart home" Wi-Fi devices have. My devices are on a VLAN dedicated to these IOT type devices which does not provide access to the internet or even any other part of my network. In other words, they are completely isolated from any other devices. If my internet fails, nothing changes with regard to the functionality of the devices. They will still perform all the expected functionality I have programmed into them.

The worst case scenario would be if my local Wi-Fi network failed. That would stop the individual devices from communicating with each other, but the individual device do not require wi-fi connection to work as a local "dumb" device. This means the interconnectivity/automation that I have programmed into my system would stop working, but the actual devices/switches will continue to work as expected. For example, I have it programmed that if anyone turns on the outside light over the garage, the system will also automatically turn on the outside light at the front door or vice-versa. Those two lights are on different circuits and switches. If my Wi-Fi goes down, they won't automatically turn each other on (which Tasmota handles), or automatically turn on at dusk and off when our house is armed "night mode" (which CQC tells them to do via MQTT), but they will still function normally themselves. You would just have to walk over to the individual switches to turn them on/off. Basically they would just turn into regular "dumb" switches which is exactly what I had before and no critical functionality would be lost. Besides, a loss of local wi-fi would create a lot more havoc than just some lighting system functionality and would be quickly corrected. Not because of the loss of lighting functionality (which probably wouldn't even be noticed), but the loss of connectivity for everything else.

Since this thread appears to cover Z-Wave, Zigbee and even Matter, thought I'd post this recent news announcement. https://z-wavealliance.org/news_p/z...ete-now-open-and-widely-available-to-members/

The top part of the article also has this "Additionally, Exegin Technologies has demoed how Z-Wave Source Code can be ported to third-party silicon, opening members to develop on any chip provider of their choice."

Interesting advancements for Z-Wave when some may have thought it just doesn't Matter (pun intended). If you already are full Zigbee/Thread setup, no need to switch, but I'm feeling more confident that I won't need to do a rip/replace of Z-Wave for the foreseeable future.

Staff member
Well that's newsworthy for sure, I posted that one on the front page

Interesting development but when is Z-Wave going to address the persistent problems that really turn users away such as the popcorn effect (can't control groups of devices in perfect unison), no way to back up a controller from one manufacturer and restore to a different brand controller, or provide a wired keypad where buttons act as virtual switches in 3 or 4 way configurations instead of having buttons that can only trigger scenes?
You must log in or register to reply here.

Migration of Home Assistant and Homeseer 4 to new hardware-OS

Could A Hub Like Polisys or Hubitat Completely Replace Homeseer?
2 3 4