I have a handfull of X-10 devices that basically all have stopped responding or rarely if at all.  It's time to move to something much more reliable.  What can I go to that I can still find items and interfaces for?   ZigBee interfaces are not available.  What are you all using and are the products still available?

Looking for stand-alone outlets, a couple of dimmers, etc.

Here still using UPB and X10.  I do have a Zigbee ZIM and Z-Wave VRCOP still connected to the OmniPro 2 panel.

Purchase a VRCOP (from Ebay maybe) and use ZWave outlets and dimmers.

Thinking that @ano has a PCS ZWave PIM plugged in to his OmnPro panel.
C

Searches for the VRC0P aren't yielding much.   Kind of what I was afraid of.   My X10 has pretty much completely failed and finding good replacements are hard to come by.  I purchased a new/used X10 interface, but it didn't help at all and only seemed to make it worse.  Not sure if it's other noise on the power line or what.  Just seems weird that nothing works anymore other than the occasional random on or off.   Any good way of testing it other than trying to find and X10 tester that no longer exists?
S

Once again I might suggest wifi devices with Tasmota flashed on them.  I've had flawless performance of my switches/dimmers.  However I cannot say the same thing about the plugs I have flashed with Tasmota.  It may be the plug I am using, but after a long period of time being plugged into power, many of the devices have become corrupted somehow.  They don't fail right away and usually take at least a year of use before they fail, but it is still annoying.  It's also not every plug, but I bet about 1/3 of my plugs have lost connection and don't work remotely anymore (the physical switch on the plug still works and you can manually turn them on and off, but they don't appear on the wifi network, nor do they respond to remote commands).

The plugs I have had trouble with are the Gosund WP-6 plugs (which have changed firmware and new hardware versions are no longer compatible with Tasmota anyway).

With the OmniPro 2 you can still find UPB HAI Pims.  You can also find Zigbee ZIMs and the VRCOP looking some on Ebay. Keep looking.

Here left house #1 mostly to UPB and some Tasmota WiFi.  UPB  / OmniPro 2 panel controls most of the inwall light switches.   Have a dual phased Volp TW523 (for X10), HAI UPB Pim, VRCOP and Zigbee Zim connected.  No noise these days for X10 / UPB stuff.  I have rigged up some ESP01's (tasmota) for some extra zones on the OP2 panel.  Easy to do.  Using Homeseer and Home Assistant here.

House #2 is all Tasmota WiFi switches, Ring Alarm, Alexa. Using Homeseer and Home Assistant in this house too.
M

I also see the writing on the wall for all my Lightolier Compose X-10 stuff - I have dozens, and they will fail eventually.  I've been testing the waters with wifi stuff - Shelly and Tasmota.  So far so good - seems reliable and inexpensive.  But two things are holding me back from moving forward with replacing X-10 with wifi:
1) I prefer my lighting schedules to be managed by the Elk M1G - it never fails, unlike Homeseer while does crash periodically.  As far as I know, there is no way to control wifi stuff via Elk rules, and I doubt there ever will be.  I'm also playing with Home Assistant which has been pretty reliable (only 1 crash in about a year), so that may be an option to run my lighting schedules.
2) I just don't see enough options available from the manufacturers of wifi stuff.  I'd like to see more decora style switches and some in-wall outlets.  The Shelly relay modules are still a bit too big to fit into an electrical box behind a standard light switch, especially in a multi-gang box situation.  The heat given off by my Shelly modules does concern me - they seem to run much hotter than my X-10 devices.

I gave zwave a good test of several years, but I find it to be way too flakey for set and forget lighting, probably due to the Homeseer implementation.   I frequently lose connectivity, I often see corrupted configuration files, interface lockups, and unexplained weirdness.   I give up.

I've considered UPB, but I am reluctant to jump into a system that is almost as old as X-10.  If wifi doesn't pan out, this may be my route, but it is very pricey.
C

I may try the UPB if others can say that it works much better than X10.   I was just leary of another powerline communication knowing I have some noise issues especially with the VFD (Variable Frequency Drive) unit for my well pump.  This thing convert 120VAC into a variable frequency 3-phase output and makes a ton of electrical noise.

I appreciate everyone giving their comments.
L

I moved up to Insteon and used many of my X10 modules with it. Insteon has been in a state of turmoil lately as the owner, SmartLabs, has been very badly mismanaged for a few years but now is in the hands of a few hobbyists attempting to recover the protocol. We all hold big hopes as Insteon is tooted to still be the best protocol most HA hobbyists have ever experienced. Insteon uses dual band simultaneous repeating mesh technologies and is very reliable in most environments, as well as supporting X10 from it's central modem, the PLM.

Over the last few years I have abandoned most of my X10 devices (just tossed out about 50 modules) as my Insteon inventory grew. The instant response, log range, and no popcorn effect, Insteon "scenes" can support leaves Zwave and most other protocols drooling. With the UDI line of home automation controllers, X10, Insteon, Zwave, and most Ethernet based protocols are supported for much less less cost than many other HA hubs.

If you want a sample of the support for this addiction have a look at the UDI forums. Many of us participate in both forums here and there.

I also am a hold-out on X10 modules. I still use them mostly for outdoor Christmas lights. They are cheap and if they get damaged from the outdoor environment, I just toss them. I also like the idea of one house/unit code for all the outdoor lights.

Indoor I use UPB, mostly PCS and HAI. With one X10. I like the SC546 Chime. I have not found anything similar to replace it.
It is located in the opposite end of the house away from the garage. So when the overhead garage door is opened, the OP2 activates the chime. (Alerts the dog also.)
Last edited: Sep 9, 2022 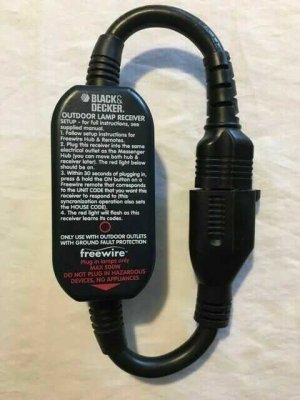 I still use UPB-- Simply Automated and PCS. It works most of the time. I had some trouble with under-counter LED lighting causing noise. I found that the noise was reduced significantly if I ran the LED fixtures at a maximum of 80%. That fixed my problem. My other problem was with a variable speed drive on my HVAC system. The variable speed drive only impacts my transmission at certain speeds, which is infrequent. I have also found that many times, the UPB module can hear and respond to the command, but cannot confirm the transmission. I really only use the confirmation when I am programming the modules.

One word of caution, you can wear out the wall switches pretty quickly if you press them hard. It required some family training.

I used X-10 before I went to UPB. UPB is much more reliable and is much more configurable if you use upstart. I use a lot of the special configuration features. I would miss them if I went to another technology.

I still use X-10 wireless, because I like the palm pad. PCS sells a module that will convert signals from X-10 to UPB-- so you can run a hybrid system if you wish.
You must log in or register to reply here.

R
State of the UPB market?

Dec 24, 2022
ultradianguy
U
K
Snaplink broken by IOS 15 may be the last straw for OmniPro-II for me