I'm back, after many years!

Hello (again)! I've first snooped around the forum to see if any of the names I remembered from years ago are still here, and recognized Brave Sir Robbin and Electron. They'll probably remember me as the Ocelot/Leopard guy... which I'm still using! I had sort of let go of the hobby side of things and just continued using my home automation devices as-is, without really working on them. Now that I'm retired, I'm getting back into a few hobbies I enjoyed, among which is home automation. I've also been doing a fair bit of reading and catching up on where home automation has come to after all these years. Quite a bit of stuff to re-acquaint with.

The current model appears to be hardware devices (hubs, gateways, direct devices, etc) matched to a phone app, and often also supported by either Alexa or Google Home. These products offer direct local control and/or through a web based account with the manufacturer. I sort of got back into it by happenstance. I updated my heating system with a nice wifi thermostat (Venstar T7900) and then explored the local API, wrote up a VB program to store furnace runtimes, temperatures, etc. to a file. Then I picked up an Alexa, mainly for my wife (who is legally blind) to use as a basic talking clock, weather and news source and such. That was followed by linking Alexa to the thermostat. At that point, the hobby side started to get a bit more serious again and thought "wouldn't it be great if I could control my X-10 lights with Alexa?" A few google searches later, I was onto the free habridge application from BWS Systems, and got it working after a couple of not so easy days of tinkering. The beast had re-awakened!

Well, the next logical step was to see if Cocoontech was still around! So here I am, back with some of the older members and I'm sure a ton of new ones. Ok, I might be the dinosaur with his old X-10 stuff, but I already have it, it works, and does the jobs still quite nicely. Plus the habridge application now allows me to tie Alexa into pretty well anything, including the Ocelot with its expansion modules and all.

So I'll be catching up on the forum and see what's going on with everyone and the world of home automation.

Holy Moly! My idol is back!

So glad to see you posting again!

Nice to see you on the forum @Guy Lavoie !

Thinking I met you at an EHExpo in FL meeting with all of the Homeseer folks back then.
G

BraveSirRobbin said:
Holy Moly! My idol is back!

So glad to see you posting again!
Click to expand...

Hehe, don't start creating expectations now! Seriously though, it's just fun to relink with some of the old timers, back when home automation was just getting started and it was still a geeky gadget thing to most people. But those were also the most fun times, when everything was still new and the possibilities seemed endless. Admit it, we'd take on certain projects just because it seemed possible, and cool. IP connectivity was hardly dreamed of back then. I think we're now down to being much more practically minded.

But you gotta hand it to the pioneers like good ole X-10, JDS, Applied Digital, Smarthome, Homeseer, etc who got this whole thing going. Especially X-10, who made this affordable enough to allow most of us to get into it at all. And some old holdouts like me still using it...

By far my most fond memories are of my collaboration with the folks at Applied Digital, especially on the appdig forum. That was the most fun 10 years or so that I had with this hobby. Too bad they never followed up with a bigger and better controller. But then again, they are mostly an OEM manufacturer and marketed very few of their own products. The other issue that they rightfully recognized was that the multiplicity of protocols that were emerging (Insteon, UPB, Zwave, Zigbee, etc) made the marketing of a standalone controller much harder to do. Even today, there are far too many of these protocols. Only the largest players like Amazon and Google can afford to keep up with interoperability. Yes the past was fun, but we can't stay there forever either!
G

pete_c said:
Nice to see you on the forum @Guy Lavoie !

Thinking I met you at an EHExpo in FL meeting with all of the Homeseer folks back then.
Click to expand...

Well I have a hard time remembering individual people that I met at that time, but that's quite possible. I remember the get together a bunch of us had at a Golden Corral buffet one evening. All that was made possible for me due to an invitation by Applied Digital. I'm grateful to them.

Well here is a picture of the group of us back around 20 years ago....are you there? 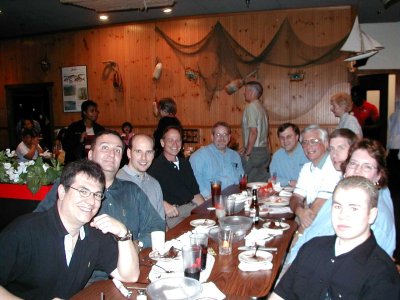 No, I was at a smaller table, located about where the picture was taken.

Staff member
Holy moly! Great seeing you post again! I think many of us are missing this type of community, especially in light of all the privacy issues associated with today's social media services. It was one of the reasons to really start focusing on the site again recently.

I still have my Ocelot running (mostly for interaction with my Sure Action Pulsors), and it has been the most reliable device in my environment, knock on wood (even more so than the ELK M1).

Looking forward to read more about your setup, I'm actually considering the Venstar thermostat myself, as my old ecobee is my only cloud dependent device.
G

Electron, great hearing from you again! Another soul who appreciates the reliability of the Ocelot. It's locked up on me exactly once in 22 years. Not too shabby. I'm actually getting into a bit of code writing these days, fired up my trusty (if dated) VB6 to try a few tricks. The first thing I'm doing with the BWS habridge is controlling my X-10 lights with Alexa commands. Of course, the versatility of the bridge is the ability to run command line programs, so this is easily expandable to other stuff. What I'm actually doing right now is writing my own version of the "x10comm.exe" utility that came with the original Activehome, to send X-10 commands from the command line. Once that's perfected, I could do other stuff, like trigger sending IR commands from the Ocelot, etc. That's the "fun" in all of this, getting stuff working together in new ways.

If you're getting a Venstar thermostat, well I wrote up a program to log the duration of all it's individual heat cool cycles. Kinda handy for optimizing the triggers for additional stages, and just to check that your HVAC is working properly. One program just collects the minute by minute status to a file, and another program produces reports, like this (degrees are in Celsius on my system):

Once it's tidied up, of course I'll make it available to others.
Last edited: Oct 7, 2022
You must log in or register to reply here.

I've returned! A new project with an old house