Thanks so much for all the help! I will figure up what I have on the board and expansion board. I didn't realize you could add another power supply to get more power.

I do have an exterior sounder attached to the system. As I recall, I did disconnect the sounder before testing the smoke alarms with Alarm Relay, though. The sounder on the keypad still sounds.
D

GeorgieC said:
Thanks so much for all the help! I will figure up what I have on the board and expansion board. I didn't realize you could add another power supply to get more power.

I do have an exterior sounder attached to the system. As I recall, I did disconnect the sounder before testing the smoke alarms with Alarm Relay, though. The sounder on the keypad still sounds.
Click to expand...

The exterior sounder has a separate current budget so we don't need to count it.
There is a 1 amp budget for bell current.
Don

I had issues here with an exterior sounder way back early 2000's and eventually changed it over to an "el cheapo" Piezo exterior sound with strobe light and put same one in the house. 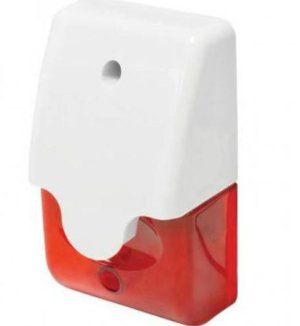 Also installed 4 wire smokes...documented it here...what a PITA that was...I did put the smokes next to the contractor installed smokes...2 story home...so went from the attic to the 2nd floor and unfinished basement to the main floor...built a chase in that house from the basement to the attic...

This was DIY and Don has much more experience in this stuff...than I do....
D

Pete,
Sounders can be an issue but OP has 1 amp budget so should be ok. I always used the Moose MPI-47 inside as it was loud and being a Piezo device didn't use a lot of current. It also was relatively big so it covered the hole in the wall from older equipment I was replacing.....
I learned through experience about smokes. I started with 2-wire smokes because they were "simpler". I learned my lesson and installed 4-wire smokes from then to now. They just are more flexible and reliable. My current preference is the system sensor I3, I4 line. You can add combo Smoke/CO detectors that work fine with HAI and Elk. You do need to use the CosmoD4W controller and the EOLR-1 power supervision relay at the end of the line. But the Cosmo gets you everything in the panel with the HAI with lots of status leds to help properly install and troubleshoot.
I forgot to mention after one firmware change on the HAI, some of the 2 wire smokes started to chirp every time you armed the system because they sent a "clear" (reverse power connection). Some smokes worked with this some bleeped which was really annoying.
Don

Here I go off on a tangent......I started learning in the 1980's about this stuff..(should have gone in to engineering but did not...) I recall getting a quote from a local alarm company back around 1985 or so...for door contacts and PIRs (old box in wall types - later smaller ones)...then I took the quote and wired the old 2 story house myself. Easy to build a chase from the basement to the attic in that house. I had two furnaces and used the boxed area for the venting to run cables along the wall of the box that went from the basement to the attic ...so there too ran my cabling from the attic down and ran cabling from the basement up.....

I used to read Radio-Electronics (started in the 1960's) and read a little advertisement for a new alarm panel. in the 1980's..called Excalibur by some engineer guy that retired from working in public sector stuff..I purchased it via a phone call at the time....the panel was large and a primitive computer...thinking it had 48 or 36 zones on the main board, text to speech and serial X10 connectivity. Many little programming buttons on the panel. You have to put the speech together by pieces pushing these little buttons. It was his wife / secretary speech he had recorded for use. The only way to program it was via tiny buttons and LEDs in certain order. I did buy a prototype with the X10 communications. Earlier ones did not have X10. It was expensive at the time...less than $1000.

I used the Excalibur alarm until the late 1990's and moved the external siren / sounder from the old connection and alarm panel to the OmniPro panel...I also used a fire bell (antique) on the detached garage...via relays. It was loud ... The panel was protected with grounding and I did see sparks one day on the panel during a heavy with lightning thunderstorm....never failed...I remember using outdoor photo sensor beams on the long driveway to trigger speech on the panel.

I did go up to 2 daughter boards on the OP2 (16 + 16 + 16) pushing it a bit...went nuts with contact switches on all interior doors at the time...just because I could...well and occupancy ceiling PIRs and wall mounted PIRs in every room of the house...over doing it a bit...in the early 2000's

So eventually went to the tiny Piezo sounders after learning my lessons on trying to use the sounders from the 1980's that I had...
D

Pete,
You definitely were into security systems before me. In the 1980's I was working for HP and at home I was assembling my first computer. A Sinclair ZX80 kit where I got to solder it all together. It still works. You mentioned your Excalibur system never failed. I will say I've seen a few HAI systems fail. But only a few. I killed one by being too lazy to turn it off while working near it. The Elk 624 power supply has voltage on its heatsink and mounting screws next to the heatsink. Screwdriver slips 12volts to ground and dead panel. Another lesson learned. Plastic tie wraps through those holes... Most of the HAI panels I've had to send in were from power problems, usually coming in the copper phone line and taking out the dialer. Now our local ISP uses VOIP connections from the router (that's on fiber) for dial tone so haven't seen those dialer problems any more.
Don

It was always a hobby here and not related to any education or what I was doing in the 80's.

Yes burned up a new OP2 panel connecting the power to it in the dark...big mistake....I saw flames which did light up the board I had connected the power terminals one post over....HAI did replace it right away no questions asked.....
Last edited: Sep 15, 2022
G

I don't really have that much on my board.
Do these specs look right?

What about the console, does that draw power?
D

GeorgieC said:
I don't really have that much on my board.
Do these specs look right?

What about the console, does that draw power?
Click to expand...

The Sounder has a separate 1 amp budget alone so the 480mA is fine.

As a test you could disconnect the farthest smoke, move the resistor to the first smoke and see what happens. That would reduce your current draw from 505mA to 375mA. If its a current draw issue it should work. If it still doesn't call out for the fire alarm, its something else.

Thanks, Don. I was thinking I should look at the max power a module would draw. I also have a GRI water sensor I'd like to hook up, I haven't done so because I would have to add end-of-line resistors to everything and I hate to mess with it all. But if I'm on the edge, I wonder if I should look into adding a power supply?
D

GeorgieC said:
Thanks, Don. I was thinking I should look at the max power a module would draw. I also have a GRI water sensor I'd like to hook up, I haven't done so because I would have to add end-of-line resistors to everything and I hate to mess with it all. But if I'm on the edge, I wonder if I should look into adding a power supply?
Click to expand...

GeorgieC. Yes adding another power supply would be a good idea. You can add a GRI water sensor without using a resistor.
On the HAI its either all zones with resistors or no zones with resistors. I've installed many GRI water sensors. 2 and 4 wire ones.
The 2 wire ones (2800) are powered by the panel. The 4 wire ones (2600) can run off separate power.
Don
G

Thanks, dwalt. How do you add the second power supply?

I took a look today and my version of PC Access is 1.9.1.0 copyright 1999-2000 HAI. The file name is Pcahmsiw19a.exe
I still have my floppy disks with the serial number, they are labeled OnQ Technologies. This is like an archeological dig!
D

Start by reading these 2 docs:

You will be setting the jumper for 12 volt operation.
Things to bear in mind. There is voltage on the heat sink. It must not touch anything. You could short out any nearby electronics.
You must add a wire from the "- Output" on the new supply to a "-" connection on the OmniLT. This is to ensure the grounds on the OmniLT and the new power supply are at the same potential. I would suggest not just mounting with double sided tape. Use the 2 screw holes at the bottom of the supply (away from the heat sink) to securely anchor it. You do need to use the double sided tape to keep the circuit board from shorting against anything. This power supply will give you an additional 1 amp of current for devices.
I'd suggest you save a copy of your config file as well as print it out before you get too far in to this project. If you use the export option, you can share the config file with us if you ask for help.
Don

Is this the chip I would need to upgrade my OMNI LT board? This is the only place I can find one for sale my:ro control HAI/Leviton upgrade chip
D

Thats it...
You must log in or register to reply here.