Everything went together smoothly, no bent legs or anything. We finally put the old chip back in and now that one isn't working either. What happened. Not sure of the part number on this?

GeorgieC said:
Everything went together smoothly, no bent legs or anything. We finally put the old chip back in and now that one isn't working either. What happened. Not sure of the part number on this?
Click to expand...

Looks like they wrote in 21A03 which would be right.
If neither eprom works something went wrong when you did the chip replacement.
You did unplug the transformer and battery first?
The notch on the eprom faces the transformer and away from the heatsink.
Compare to the attached image. Note the 3 leds under the heat sink. What is the middle one doing? Off means not alive. Blinking means alive.
The lower led if on means you have power.
Check the 4 wires for the keypad. Make sure one wasn't broken while replacing the chip.

Definitely unplugged the battery & power. The chip was hard to get out but we patiently worked it out, and then carefully plugged the new one in. Nothing got bent or damaged that I can see. Notch is facing the right as in your photo. All wires are firmly connected. The status light does not come on, only the top and bottom lights. It is a head scratcher, we just cannot figure out what went wrong.
D

We removed the ribbon cable on the expander before changing out the chip and did try powering it up with that still removed. I'll get some photos and post them.
G

Here are 3 photos, first is of the board originally, taken in the past before I had the expansion module on. Second is with the HAI chip installed, 3rd is with the original chip re-installed. Let me know if you have any ideas, I fear I am just S.O.L.

Is there any kind of issue with the OnQ branded keypad not being compatible?

I tried calling Leviton support today but they aren't taking calls on these boards anymore, you have to email, so I did and I'll see what they say.
D

GeorgieC said:
I tried calling Leviton support today but they aren't taking calls on these boards anymore, you have to email, so I did and I'll see what they say.
Click to expand...

I think they quit repairing OmniLTs a few years ago. Be patient. I'm out of town tomorrow. May have a plan for you later in the week.
G

dwalt said:
I think they quit repairing OmniLTs a few years ago. Be patient. I'm out of town tomorrow. May have a plan for you later in the week.
Click to expand...

Thanks! I guess worse comes to worse, maybe I can find a used board on ebay. I don't know how to tell if it would be compatible with my keypad or other modules though.
D

There are no compatiblility issues if you get another LT. Its the only square controller HAI made. All the rest are rectangular in shape.
HAI keypads work on all HAI controllers. Your expansion board only works on the LT.

I enlarged the picture above. Does the board work with the old chip back in? 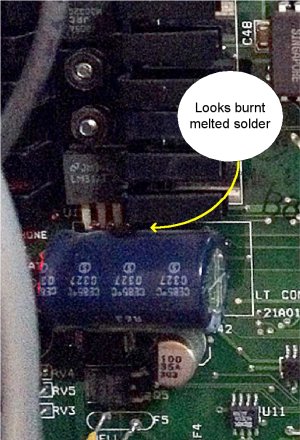 Thanks Pete, I will check that spot out! No, it doesn't work with the old chip back in.

Pick up capacitor a touch and clean under neath between posts on the LM chip with some pick or tiny screwdriver.
G

Here's an update on the situation. I confirmed with Leviton they aren't repairing the LT boards anymore. I was able to find an almost identical LT board on ebay that was HAI branded already, for a good price. This time I had it flat on the table and was even more careful switching out the chips. There were no issues whatsoever changing them out. But the same thing happened. The board powered up before I changed the chip and afterwards it was dead. I put the old chip back in, still dead. So. What is happening here. There was no damage, nothing burned, melted or deformed, everything looks perfect. Also, I dismantled the old board and took a close look at it, there is no damage on it, it was just a shadow in the photo I think. I was told that the worst that could happen is the chip doesn't work and I could just replace the old chip but there is something else going on here. Any ideas?
D

My only thought is the new chip you got is bad. You don't need the version 4.0. You just need an HAI OmniLT chip that supports the extended temp sensor.
Anything newer than 2.8 would work. Anything in the 3. range will work.
You must log in or register to reply here.